Home » Newspaper's News » The Supreme Court has ordered not to prosecute the companies which did not pay adequate wages in the lockdown.

The Supreme Court has ordered not to prosecute the companies which did not pay adequate wages in the lockdown.

The Supreme Court has ordered not to prosecute the companies which did not pay adequate wages in the lockdown.

The country's high court has ordered all administrations in the country not to prosecute companies that are unable to pay workers during a nationwide shutdown due to Covid-19.
The Supreme Court sought an answer from the Center
Justice L. The bench headed by Nageshwar Rao, Sanjay Kishan Kaul and BR Gavai has directed the Center and the states not to prosecute private companies and factories for non-payment of work compensation. The High Court has given its verdict on the petitions filed by the industrial units and ordered Kendall. The Union Home Ministry had on March 29 issued a circular directing private companies to pay full salaries to employees even during nationwide shutdowns.

Applicants are free to decide on payment 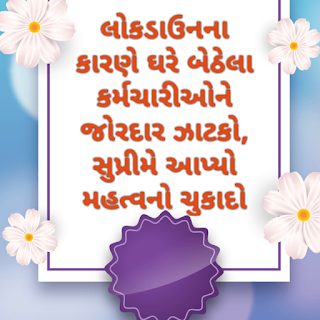 Check Your Name In NFSA List l Gujarat
The industrial units had knocked on the door of the Supreme Court claiming that they had no other option but to pay the salary as the production itself had come to a standstill. The petitioners told the high court that during the lockdown imposed in view of the Corona virus epidemic, organizations should be given full leeway to pay wages to their workforce. The petition was filed by a Mumbai-based garment company and a Punjab-based group of 41 small associations.
In charge of different articles of the constitution
Literature for competitive exams *

The petition sought the Home Ministry to quash the March 29 order. The petitioners challenged the constitutional legitimacy of Section 10 (2) of the Emergency Management Act 2005. The Punjab-based Ludhiana Hand Tools Association claimed that the order issued by the Home Ministry on March 29 under the Emergency Management Act, 2005 violates Articles 14, 19 (1) (G), 265 and 300 of the Constitution, which should be withdrawn. Taking this argument into consideration, the High Court gave its verdict.