Ahmedabad. With Bhavnagar registering one more new case, the total number of positive cases in the state has risen to 9,933 and the death toll has reached 606. In the state, 340 new cases of corona have been reported in 24 hours and 20 patients have died while 282 patients have been discharged. State Police Chief Sivananda Jai ​​said all agriculture and agriculture-related activities across the state have been exempted from the lockdown. So that farmers can continue farming activities. Farmers will not be stopped by the police going for farming. Farmers are also exempted from selling their farm produce. In areas where industries have been exempted. It will not stop industrial activity, employees and vehicles. 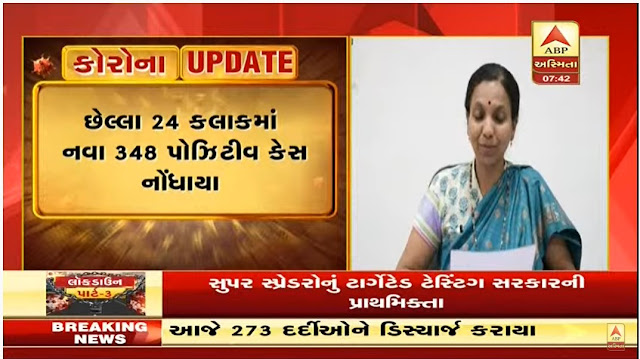 Significant events since the morning of May 16th

Proceedings if the guideline is not followed: State Police Chief
State Police Chief Sivananda Jai ​​said that the police were maintaining security to ensure that the lockdown was carried out peacefully in the last days of the third phase of the lockdown and that social distance was enforced where concessions were given. Shops for essential items are allowed to continue in the canteen areas, but police are keeping a close eye on the sale of prohibited items. People are appealed to enjoy concessions in the same period in which they have been granted concessions. All types of service and sales activities except emergency services are closed from 7 pm to 7 am. People also follow this guideline. Violation of this guideline will result in action.
The last digit of NFSA ration card which will be 1 tomorrow will be able to get grain kit: Ashwini Kumar

More than 65 lakh card holders under NFSA have NFSA cards. More than 3 lakh BPL card holders will be provided foodgrains in May as well as April. Along with this 65 lakh 40 thousand and 3 lakh 40 thousand thus 68 lakh 80 thousand families will be distributed food grains from 17th to 23rd May. Tomorrow i.e. on 17th May the last digit of NFSA ration card which will be 1 will be able to get the grain kit from the cheap grain shop. 25 has decided to give subsidy. The subsidy will be delivered to the registered Gaushala and Panjrapol through the District Collector. There are 4 lakh cattle in Panjrapol and Gaushala. It is estimated to cost Rs 30-35 crore. A week later, there are essential supply shops in Ahmedabad. Grocery, vegetable and fruit shops were started. In a single day, 30,000 orders have been received in Ahmedabad city, in which a cashless payment of Rs 8.5 crore has been made, said Chief Minister's Secretary Ashwini Kumar.