The number of corona patients in Gujarat has reached close to 10 thousand. A total of 9,267 positive cases of corona, 566 deaths and 3,562 patients have returned home after recovering from 365 new cases in the 24 hours that ended at 5 pm on Wednesday across the state. State police chief Sivananda Jai ​​said the lockdown was being strictly enforced by the police. Legal action is being taken where the law is violated. There is still some activity going on that poses a risk to the health of other citizens. Crimes such as gathering people without a good reason or selling prohibited items and going out unnecessarily are being reported. Even though it has been said before that people do not gather at religious places, there are still incidents of people gathering. 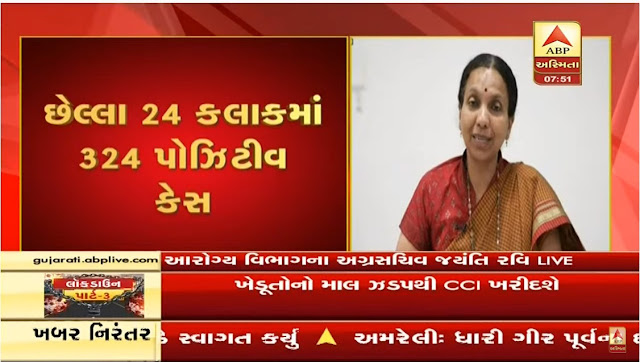 Important events since the morning of May 14th

Self-reliant Gujarat Sahay Yojana announced, loan up to Rs. 1 lakh at 2% interest rate
After Prime Minister Narendra Modi spoke of a self-reliant India and various packages were announced by the Union Finance Minister, Chief Minister Vijay Rupani has announced a self-reliant Gujarat assistance scheme. The scheme will benefit 10 lakh people. Loans from banks have also been arranged under the scheme. Banks will pass loans only on the basis of application. Small traders, businessmen, hawkers, rickshaw pullers, etc. will get a loan of Rs 1 lakh at an annual interest of 2%. While 6 per cent annual interest will be paid by the state government, the first six months will not have to pay interest and principal, the chief minister said.

CM's presentation to Center for speedy purchase of farmers' cotton through CCI: Ashwini Kumar
Chief Minister's Secretary Ashwini Kumar said the Chief Minister has spoken to the Central Textile Minister. In which the cotton of the farmers cultivating cotton in Saurashtra and Central Gujarat should be procured very quickly through CCI and the farmer should get a good price for his cotton product at support price. The Union Finance Minister has announced a good package for MSMEs. Gujarat is considered the stronghold of MSMEs. Millions of units are operating in Gujarat so the Chief Minister has welcomed this package and this sector will come out stronger and stronger in Gujarat.

Deputy Chief Minister Nitin Patel, who was here to inspect the ongoing works including the Sixlane Highway on Sarkhej Highway, said that a meeting of the core committee of the Gujarat government is to be held this afternoon. The meeting will outline the lockdown 4 with the new look.
For buses coming from Delhi, buses will run on Tantra on Route 15
Special arrangements have been made for the passengers of the train coming from Delhi to Ahmedabad. In order to avoid any inconvenience to the tourists, buses will be run on 15 different routes from Sabarmati station.

The state began giving Tosily Zumaib injections to critically ill patients
"We have started giving Tocilizumab injections in different hospitals where needed," said Jayanti Ravi, Principal Secretary, State Health. These injections are given to a patient in severe condition, which is very expensive. But it has been approved in the purchase committee and the process of use has started. 2760 tests were done in 24 hours, 22 patients died from other diseases, high risk and coronary heart disease. 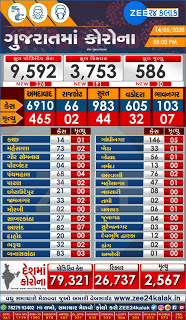 The Health Secretary further said that 364 new cases of Covid 19 have been reported in the state in the last 24 hours while 7 patients have died due to corona and 22 due to other diseases, high risk and corona. Of these, 25 died in Ahmedabad, 3 in Surat and 1 in Patan. While 292 cases have been reported in Ahmedabad, 23 in Surat, 18 in Vadodara, 8 in Mehsana, 7 in Devbhoomi Dwarka, 3 in Bhavnagar and 3 in Jamnagar, 2 in Patan, 1 in Panchmahal, Banaskantha, Gir-Somnath, Kheda, Aravalli, Mahisagar, Junagadh and Amreli. In the last 24 hours, 2,760 tests have been done and so far a total of 1,22,297 tests have been done, of which 9,268 have been positive and 1,13,029 have been reported negative. Out of the total 9,268 patients registered so far, 39 are on ventilators, 5,101 are stable and 3,562 have recovered and returned home. While 566 have died. Amreli district, which has so far survived the Koro infection, has registered a positive case in the 8th week after the first case was reported in Gujarat. Another 29 people were killed, according to figures released by the Gujarat government on Wednesday. Of these 29 patients, only seven died of covid infection. The remaining 22 had mild to severe illness.