Due to Corona's outrage, the central government is currently announcing a lockdown all over the country. As a result, people's business is closed. So that people are facing economic crisis. The state government has made a big decision to provide relief to the people. 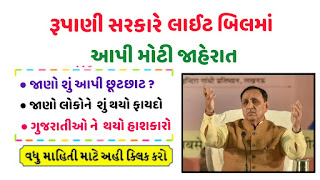 ●No penalty is charged
At a meeting of CM Roopani's chair, it was decided that everyone in the state would have to pay their March and April bills on May 15. Maybe if a person pays late, no penalty will be levied on him. Also, its connection cannot be cut off

●People have to pay for consumption
In addition, CM Rupani said that people are suffering from economic collapse due to the closure of the trade at present. If the fixed charges are not taken in the bill, then only people will have to pay the consumption amount. The meeting, chaired by the CM, was attended by people including Energy Minister Saurabh Patel, Home Minister Pradeep Singh, Principal Secretary Anil Mukim.

●Gujarat Government's strong preparations to fight Corona
The number of corona-positives has reached 44 in Gujarat. A 37-year-old man has reported a positive case of Corona at Rajkot today. What is shocking is that the newly reported case in Rajkot is spread by local transmission ie infection with each other which is really worrying. There are currently 44 positive cases registered in the state. A total of 15 cases have been registered in Ahmedabad city and rural areas. So even though people are still quarantined, they violate it so that a total of 236 complaints have been registered. One of the few relief news for Gujarat is that four Covid Hospital is ready. 156 ventilators have been ordered. None of the patients are currently on ventilator.