Home » Useful info for All » Now APL-1 families of the state will also get free grains, pulses, sugar

Now APL-1 families of the state will also get free grains, pulses, sugar

One more sensitive decision of the Tribunal: After the BPL and APL, now the APL-5 category was forced to lock in the APC-coded people at the time of the lockdown: this was a major result of the happy ending of this category.
After providing free food to the families of the poor during the lockdown in the fight against the Congress in Gujrat, now the APL-4 category will continue to attract even the most unemployed people.


This was an important decision taken at a Cabinet meeting held today at the video conference of the Chief Minister Vijay Rupani. Vijaybhai said that the first Gujrat in the country has given BPL and APL families a charge of any kind in the first week of the current month. There are still millions of people who do not use a BPL or APL card due to the lockdown situation, and they have an APL-2 card. But there are strong income earners and marginalized and middle class people.

They too have decided to give 5 kg wheat, 2 kg rice, 2 kg pulses and 5 kg sugar in the coming days. These are the cases that do not fall under the National Food Security Scheme, but the assistance provided to them today is only a matter of state education. The Chief Minister said that this decision has been taken by Gujarat Government. In the coming days, these families will be given fixed cereal grains and sugar, whose health will now be known.

The Chief Minister said that there are hundreds of families in the APL-5 card in the state who are happily prosperous and they do not have any problem with the current state of affairs, so I do not want to ignore the benefits of this publication. They show their sympathy for the poor. All the schemes, including these grains, have to be borne by the state government itself. And it is our resolve not to starve anyone in the community so we hope that all of them will cooperate.
He said that the Cabinet today decided that more than 3 lakh APL-1 card holders of middle class families of APL-1 who did not get food grains under NFSA under National Food Security Act. Kg of wheat, 3 kg of rice, 1 kg of lentils and 1 kg of sugar will be given free of cost from government approved cheap grain shops. 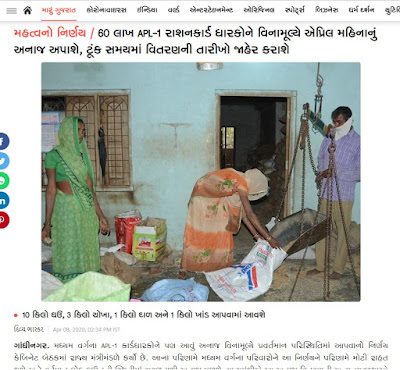 A social obligation to fill the gap between Heaven and Heaven is given
He also added that in the case of the current lockdown, no family is going hungry so that the state government has consciously decided to distribute food grains free of cost to 60 lakh families with APL-1 card when there are rich class APL-1 cards. Heavy and heavy-duty so that people-families with their rights are deprived of their rights and such food is available to the needy. The obligation to pay social responsibility.

60 lakh APL-1 ration card holders will get free grain for the month of April, distribution dates will be announced soon

The Cabinet has decided to give such cereal free of cost to the middle class APL-1 card holders in the current situation. This will result in great relief to middle class families as a result of this decision and will easily get food grains in the current lock-down situation. The Chief Minister has also directed the concerned departments to ensure other arrangements for distribution of these grains and the dates of distribution will now be announced. 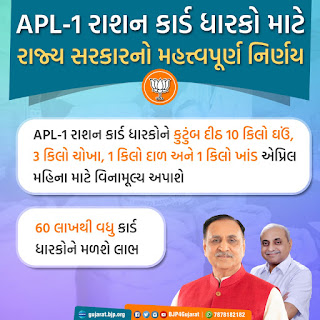 APL-1 card holders will distribute 10kg of wheat, including wheat

He declared that over 60 lakh APL-1 card holders of middle class families of APL-1 who did not get food grains under NFSA under the National Food Security Act were given to middle class people for 10 kg wheat, 3 kg rice, 1 per family. Kg of pulses and 1 kg of sugar will be provided free of cost from government approved cheap grain shops.
The distribution of food grains was distributed free to 66 lakh families in April