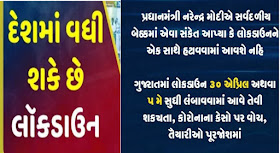 After the meeting, MP Pinaki Mishra claimed that the government would not remove the lockdown altogether

Modi has previously discussed with chief ministers, cricketers, film stars and media representativesPrime Minister Narendra Modi on Wednesday discussed the corona crisis with 16 MPs from the NDA and opposition through video conferencing.  After the meeting, MP Pinak Mishra said that Prime Minister Narendra Modi has made it clear that the lockdown will not be removed simultaneously.  Mishra said that the Prime Minister told us that life before and after Corona's transition would not be the same.  Modi also hinted at a cabinet meeting that the lockdown would not be removed altogether.  Apart from this, the chief ministers of five states Madhya Pradesh, Maharashtra, Rajasthan, Telangana and Kerala are also in favor of boosting lockdown.

Now APL-1 families of the state will also get free grains, pulses, sugar

Video conferencing by PM Narendra Modi today with BJP, Congress, DMK, AIADMK, TRS, CPIM, TMC, Shiv Sena, NCP, Akali Dal, LJP, JDU, SP, BSP, YSR Congress and BJD's Lokar and Lokdan on the floor.  General Chat Chat Lounge  In this meeting, floor leaders have submitted 5 demands to Prime Minister Narendra Modi.  It calls for reducing the FRBM fiscal limit of the states by 3 to 5 per cent, giving the states their remaining money, increasing the relief package from 1 per cent of GDP to 5 per cent, freeing the core test and making all medical equipment available, including PPE.
Click here Gujarati