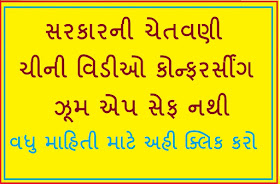 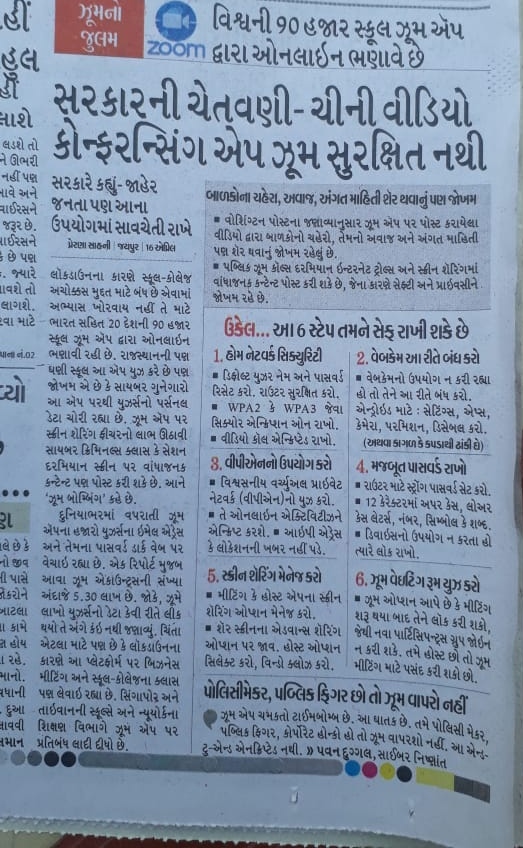 New Delhi. Video and Conference Calling App Zoom is being used for online school classes, conferences, meetings not only in India but around the world. Now, the government has issued a directive to take precautionary measures in the wake of the massive data leak. The Home Ministry Advisory clearly states that this app is not secure. The government had earlier also warned people on February 7 and March 7 to constantly change their passwords and to be cautious while giving permissions to conference calls.According to the Cyber ​​Security Intelligence Rfm Zwahmi, a hacker was uploaded to Fairm on April 1 to sell several Zoom account details. The details of 1.5 lakh users were being sold for $ 1.8, which means 5 paise. Thankfully, some account details were shared for free.


Gujarat gets huge success in finding Corona vaccine, the only state in the country to do this work

Defense Minister Rajnath had just spoken to the Indian army chiefIndia's Defense Minister Rajnath Singh had a meeting with the Chiefs of Defense Staff General Bipin Rawat, besides the Army, Navy and Air Force chiefs, through the Zoom app on April 1. When Zoom's account is hacked out, concerns about this meeting have also been raised. However, this issue is not just for Rajnath Singh but it is a matter of concern for all who use Zoom. Commerce and Industry Minister Piyush Goyal was also seen video conferencing through the same app.

Britain's cabinet meeting was leaked According to Pawan Duggal,India's chief cyber security expert, government, leaders and corporate affiliates should not use this app. His link with China is also worrying. Cabinet meetings were held in Britain by the same app, which was announced shortly after the Internet.

A number of companies, including Google, have imposed sanctions Zoom has recently been banned by several large companies, including Google, NASA, Space X, Apple. While companies like NASA and Space X have also banned their employees from using the Zoom app. This app is banned when there is a blue film playing in school class on the Zoom app in Singapore.Advisory issued by the Home MinistryNew user ID, password used for each meeting Keep the waiting room enabled, keep the viewing option disabled. The screen sharing option should be with the host. Minimal use of file transfer options.Read to Gujarati click here