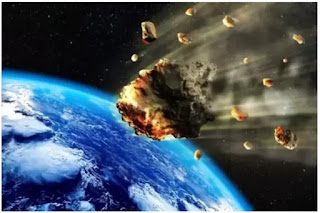 NASA scientists have issued a major warning about a celestial disaster moving toward Earth.  Earlier NASA had predicted that these tiny stars or planets called Asteroid in English would pass through Earth on April 29.  However, earlier it was number one, now according to a new warning, these four Asteroid are moving towards Earth.

According to NASA, the asteroid will propagate from Earth on March 21 and 22, although it will not damage the Earth, but it is a celestial disaster that will cause changes in celestial waves. NASA estimates that these planets will pass 7,13,000 kilometers away, but the distance in the world of astronomy is insignificant.  In addition, an asteroid will pass at a distance of 3.05 million NASA named these asteroids 020KF, 2020FS, 2020DP4 and 2020FF1.  The dimensions of this asteroid are only 43 feet.  However, at a speed of 37,000 kilometers per hour, the disaster continues. The 2020FS's diameters are 56 feet.  The asteroid is moving at a speed of 15 thousand kilometers per hour.  According to Indian time, this star will pass through the Earth at 8.59 hours at night.

On Sunday, the largest Asteroid 2020 DP4 will reach Earth.  The asteroid's diameter is 180 feet, while it is moving at 47 thousand kilometers per hour.  In addition, the asteroid called 2020 FF1 has a diameter of 48 feet. On March 23, 2020, DP4 will pass 12 hours and 4 minutes at night according to Indian time, while 2020 FF1 will pass at 3 o'clock and 39 o'clock. The asteroid, which had previously passed on April 29, had disrupted scientists' sleep. However, scientists now believe the risk is avoided, but NASA is watching the entire event.