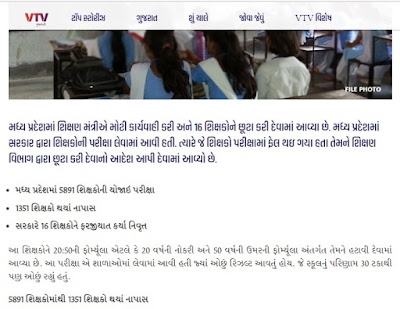 These teachers have been eliminated under the formula of 20: 50 ie 20 years of employment and 50 years of age. This test was taken in schools where low results were available. The result of the school was less than 30 percent.
By far the biggest penalty has been to the Ahmedabad operator, the amount so that a new car arrives.Such examinations were conducted in such schools. A total of 5891 teachers appeared in the exam, out of which 1351 teachers failed. Then the failing teachers were given training and then the exam was again taken. Yet there were 84 teachers who made less than 33 percent of their marks and failed.
He warned of 26 teachers failing in both the exams from higher and higher secondary schools. They are being sent to primary and secondary schools. At the same time, 16 of the 18 teachers under the 20-year job or 50-year-old formula were forced to retire. Documents from two teachers are being investigated. At the same time a departmental inquiry has been launched against 20 other teachers.

The Madhya Pradesh government has given compulsory retirement to 16 government school teachers who fail to qualify the examinations conducted by the School Education Department to test them.Minister for School Education, Madhya Pradesh, Prabhuram Chowdhary said here on Saturday that an examination was conducted on 12 June in which 5891 teachers appeared. The exam was conducted for the teachers of those schools which consistently gave results below 30 per cent."Out of 5891, 1351 teachers got failed as they scored below 50 per cent," said the minister."Those failed were provided with two months training and the second exam was conducted on 14 October. They were allowed with the books in that exam, and the pass percentage was also reduced to 33 instead of 50 as earlier, but even after that 84 teachers were disqualified," said the Minister.Subsequently, a committee was constituted that recommended compulsory retirement to 16 teachers out of these 84 while others are left with the warning and some were posted elsewhere. (ANI)