Important of Shitala Satam Vrat is observed in the month of Sravana on the seventh day of the dark fortnight. On this day Shitalamata’s puja is performed all Temple
Important Of Shitla Satam is also believed that Goddess Shitala cures and controls smallpox, measles and chicken pox etc and devotees worship Her to ward off an outbreak of such illnesses. In Gujarat, a similar ritual is observed a day before Krishna Janmashtami and is known as Shitala Satam.

The fast, which is kept on Saturday 22 August, is dedicated to Maa Sheetla. Earlier, when children used to come out of the mother’s body, that is, small grains came out on the whole body, then the elderly considered it to be an outbreak of mother Sheetla. Therefore, this fast started to calm and please Mother Shitala. Many times this disease was also considered as a form of smallpox. By observing this fast, women get a son and he stays healthy.
Shitala Satam is significant day in Gujarati Calendar. It is dedicated to Goddess Shitala. It is believed that Goddess Shitala protects her devotees and their families from measles and chickenpox. Hence, families in Gujarat observe rituals of Shitala Satam to seek blessing of Goddess Shitala.
The most significant ritual, which is followed on the day of Shitala Satam, is that no fresh food is cooked in the family. The food which is consumed on the day of Shitala Satam should be cold and stale. Hence most Gujarati families prepare special food on the previous day which is popularly known as Randhan Chhath.
The concept of Shitala Satam is same as that of Basoda and Sheetala Ashtami which is observed just after Holi in North Indian states. Shitala Satam is also spelled as Sheetala Satam and Sitala Satam. 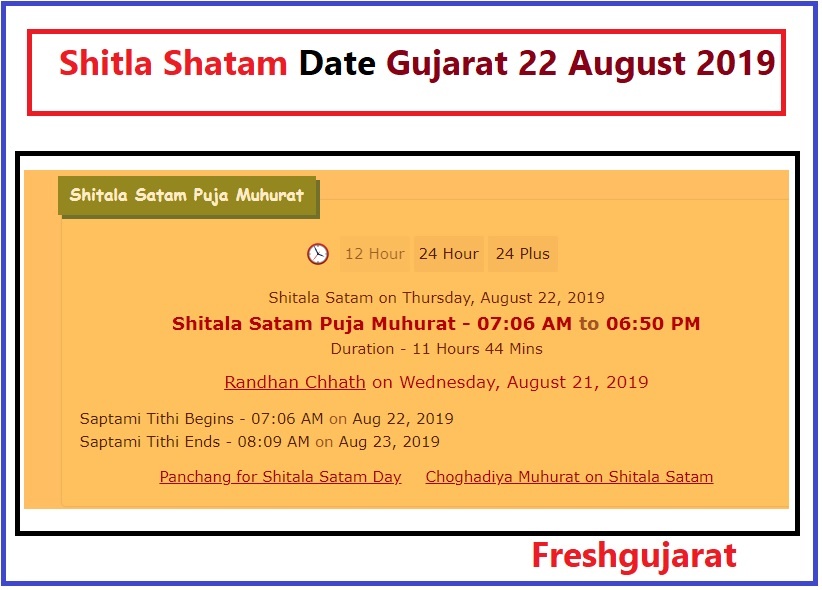 The festival of Sheetla Saptami-Ashtami is celebrated on the day of Chaitra Krishna Saptami-Ashtami after Rangpanchami. On this day, during the worship of Mata Sheetla, cold food is offered. In which the mother is pleased by offering sweet rice, unpasteurized pudding, malpu or poo, dal pudding, sweet dumpling, pakoras, kadhi, gram dal, halwa, rice, ravadi etc.
After worshiping the mother, the mother is pleased to enjoy these cold food including family food by offering these dishes, along with protecting the child and fulfills all the wishes. Let’s know … 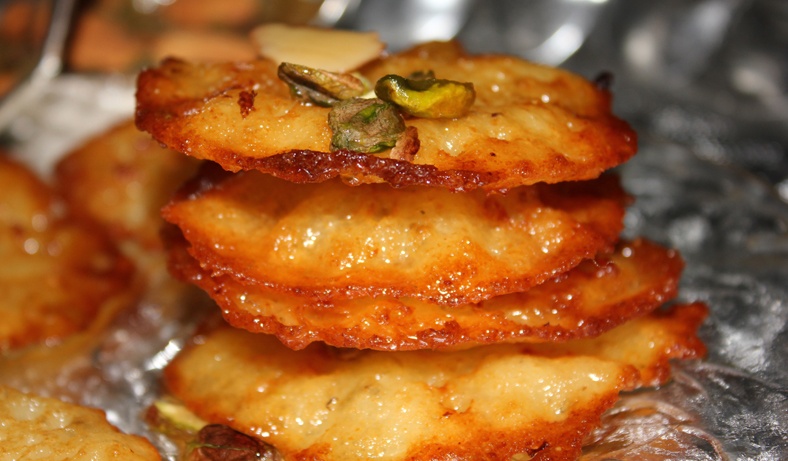 material :One cup fresh milk, one cup maida, one cup sugar, one teaspoon lemon juice, one teaspoon fennel, oil (for frying and moyan), loaf bowl pistachio-almond cuttings.
Method :First of all, filter the refined flour and mix 2 spoons of oil in it, add milk and fennel and prepare a thick solution. Now prepare sugar syrup by adding sugar, lemon juice and water in a vessel.
After that, heat the oil in a pan, pour the batter in a pan and fry till crisp. Then dip it in the syrup and keep it in a separate vessel. Serve the pistachio-almond cuttings on top. 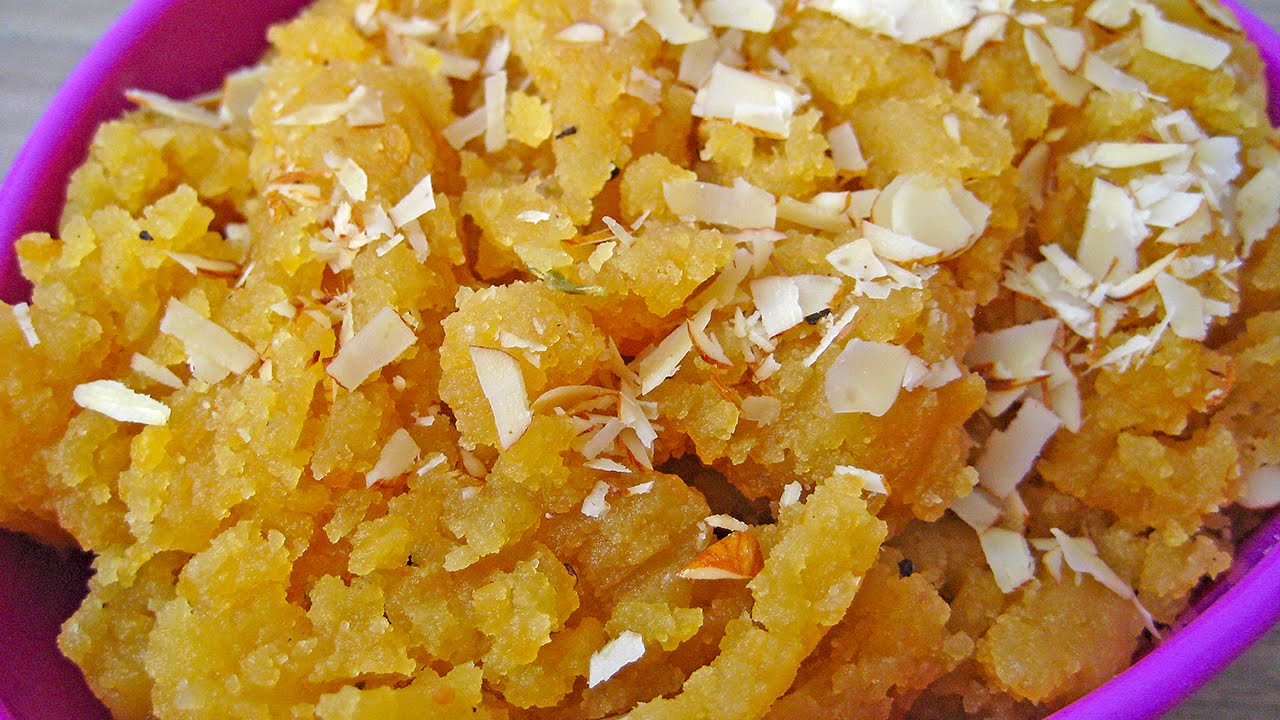 material :100 grams moong dal, 100 grams chana dal, 50 grams urad dal, 50 grams soybeans, 250 grams sugar, 1/2 tsp ground cardamom, 150 grams desi ghee.
Method :Bean clean all the pulses first. Then wash and soak them for 2-3 hours. Drain the water of soaked pulses and grind them in a grinder. Add 1 cup of water to the sugar and cook until 1 wire syrup is formed. Keep the prepared sugar syrup aside.
Now heat ghee in the pan. Add ground lentils to it, fry on low flame while stirring. After smelling and frying the dal well, mix sugar syrup and cook it. Now add ground cardamom. Now let it cool down. Serve it with very tasty mix dal halwa. 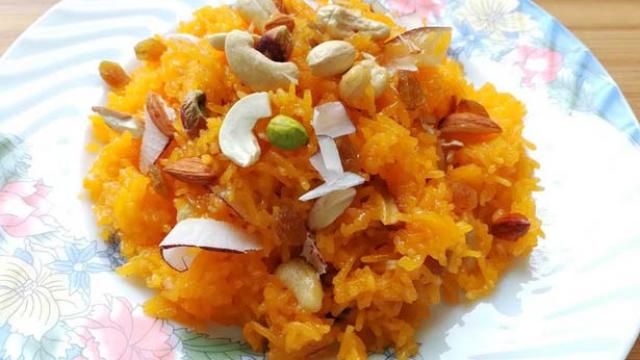 material :1 bowl basmati rice, one and a half bowl sugar,
cardamom powder half teaspoon, 5-7 saffron flakes, a pinch of sweet yellow color or half a teaspoon turmeric, 1 teaspoon ghee, 2-3 cloves, dry fruits pudding bowl, 15-20 raisins (Soaked in lukewarm water).
Method :Thaw for one hour before making rice. Now boil water in a large jar. Add turmeric to it and cook the rice and keep it on a plate to cool down. On the other hand prepare sugar syrup for one to one and a half dates. Add cooked rice and stir for a while.
Now mix cardamom and sweet color. Heat ghee separately in a pan or kadchi, add cloves and top it with rice. Also add the dry fruits and soaked raisins and mix it together to offer delicious royal sweet rice. 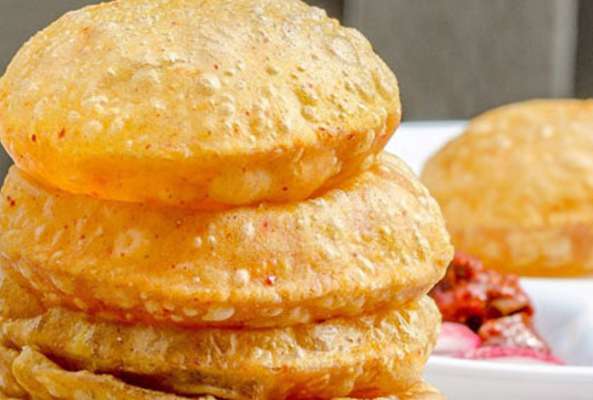 Material :1 bowl wheat flour, 1 tbsp gram flour, half a teaspoon celery, loaf spoon turmeric, oil (for frying).
Method :First of all, sieve the wheat flour and add all the ingredients except the oil to it and knead a stiff dough. Now cover it with a cloth for 15-20 minutes.

Last Word  All Are Good Recipes And MAke In Shitla Satam Festival Please Visit Our Freshgujarat.comWebsite………………..

Important: Please always Check and Confirm the above details with the official website and Advertisement / Notification