Gujarat government on saturday announced to increase the Dearness Allowance (DA) of more than 9.61 lakh employees and pensioners by 3 percent with retrospective effect of January 1, 2019

With this the DA has been increased from 9 to 12 %. DyCM cum Finance Minister Nitin Patel said that the increased salary would be paid from February month along with the arrears since July last year.
This decision would put an additional annual burden of Rs 771 crores on the state exchequer.
He said that a total of 9,61,638 employees and pensioners including 206447 employees of the state government, 225083 of Panchayati Institutions, 79599 others and total 450509 pensioners would be benefited from the increase.
Patel clarified that the total arrears since July would be paid at one time with February salary (to be paid in March this year). 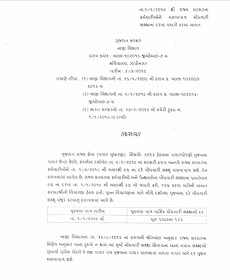 In good news for over nine lakh state government employees and pensioners, the Gujarat government has hiked the dearness allowance (DA) to nine per cent from the existing seven per cent.
The increase of two per cent will come into effect retrospectively from July 1, 2018, announced Deputy Chief Minister Nitin Patel in Gandhinagar Thursday.
The hike will benefit over 5.11 lakh state government employees and over 4.5 lakh pensioners.

Another employee-oriented decision taken by the state government