Praveshotsav cancelled
Praveshotsav 2.0 is cancelled due to the cyclone Vayu.It was preplanned on 13, 14 and 15 but initialy postponed due to VAYU effect.Today there was a cabinet meeting they decided to cancel the Praveshotsav 2.0 because its many days pass of the new sem of the school


Here is the pic of the news 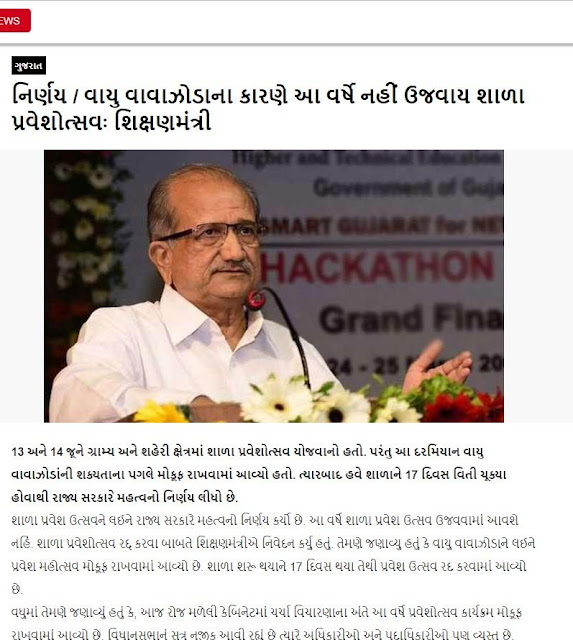 Vayu hurricane - It is confirm forecast of natural disaster of hurricane named VAYU Going to effect Gujarat coastal area so it is not possible to held a prograame like Praveshotsav so government Postponed it and publish the official circular by the education department of Gujarat.

Praveshotsav Kanyakelvani mahotsav
The aim of the praveshotsav is 100% enrollment in class 1 and minimize the dropout ratio.
It was first started in year 2003 by the Mr.Narendra Modi when he was the chief minister of Gujarat.Earlier it was only in the primary section but from last year secondary school also included in this drive. As a result of these praveshotsav there is nearly 100% enrollmemt achieved in standard 1st as per the official sources of Government it shows that decrease of dropout ratio too.


Together with the state ministers, 57 dignitaries were also going to different schools and the students had to be admitted to the school. But a decision has been taken to cancel the admission this year at a Cabinet meeting on Wednesday.

Education department of Gujarat
Education department of Gujarat doing many experiment to the primary education specially from last year to improve the quality of education in Government school and started many programmes like Mission vidhya,Gyankunj,weekly Unit test,standrad 2 upacharatmak kary etc .And also they introduced the new updated version of Gunotsav 2.0 and praveshotsav 2.0 this year. Recently they started the new Control and Command center at Gandhibagar from that they will keep eagle's eye on the quality of education providing in the Government schools and make efforts to improve it.