Home » Newspaper's News » If a worker employed in a fixed payee gets caught in anti-corruption, he can not be suspended directly.

If a worker employed in a fixed payee gets caught in anti-corruption, he can not be suspended directly.

If a worker employed in a fixed payee gets caught in anti-corruption, he can not be suspended directly.

The complete verdict of Gujarat High Court
on 5th Pay Commission Report - Excess payment made due
to wrong/irregular pay fixation - Recovery of - Permissibility -
Whether over-payment of amount due to wrong fixation of 5th
and 6th pay scale of teachers/principals based on the 5th Pay
Commission Report could be recovered fr om the appellants
who were serving as teachers or whether the appellants could
retain the amount received on basis of irregular/wrong pay
fixation in absence of any misrepresentation or fraud on their
part - Held: Any amount paid/received without authority of law
can always be recovered barring few exceptions of extreme
hardships but not as a matter of right, in such situations law
implies an obligation on the payee to repay the money,
otherwise it would amount to unjust enrichment - Appellants
did not fall in any of the exceptional categories, over and
Fix Pay Policy Start In 2006 In Gujarat. There After Government Made Lots Of Changes In The Fix Pay Policy.Many Time Government Hike The Salary Of Fix Pay Workers. Many Time Give Him Other Benifit Too.During This Time Government Made Lots Of GR Change The Fix Policy.Last At Government Made Huge Change In Fix Pay Scheme In 2017. Government Hike The Salary Of This Employees As Well As Give Lots Of Benefits Which The Permanent Employees Gets 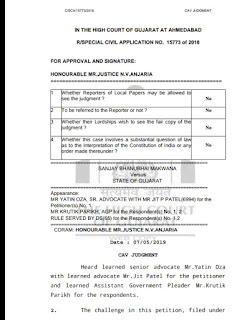 above, there was a stipulation in the fixation order that in the
condition of irregular/wrong pay fixation, the institution in which
the appellants were working would be responsible for recovery
of the amount received in excess from the salary/pension -
Excess payment made accordingly ordered to be recovered
from appellant's salary in twelve equal monthly installments.
The appellants-teachers/principals filed writ petition
before the High Court seeking a writ of certiorari to quash
an inter-departmental communication followed by a letter
issued by the District Education Officer to the Manager/
Principal of few Sanskrit Colleges in Hardwar where
excess payments had been made due to wrong fixatio