Advice to the Guardian to Access Only if Classes 12 Guarantees

Advice to the Guardian to Access Only if Classes 12 Guarantees

After the Surat incident, the Guardian team prepared a special form for the accuracy of education before the admission of the children.Ahmedabad: Parents have recommended the adoption of the Guarantee Receipt from the Classes Administrator before taking admission in the child's school or tuition class. For this the Wali Board has also declared a 12-point form. Prior to admission, this form has been advised to be filled by the school administrator or the Classes Administrator. Confirm admission only if the guardian feels after all the information, if there is a lack of skills in the classes or schools, the parent can ask for help from the congregation. 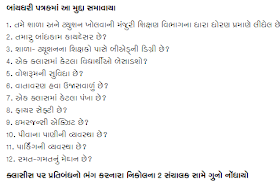 After the Surat incident, the Guardian Congregations are concerned about Fire NOC and Security. Each parent acquires information about the topic of the form declared before taking admission in school or classes. "We have told every guardian to take a guarantee from the classes and the school so that classis operators can not escape," said Naresh Shah, president of All Gujarat Guardian Federation. On the other hand, the Classis administrators will be rallying from the Town Hall on Monday morning to protest the closure of the classes.
This issue is included in the Guarantee Form
1. Do you accept the permission to open school and tuition as per the norms of the education department?2. Is Your Construction Legal?3. Do the teachers of tuition have a BED degree?4. How many students sit in one class?5. Has the facility of the washroom?6. Is the atmosphere airy?7. How many fans are there in a class?8. Is Fire Safety?9. Emergency Exit?10. Is drinking water arrangements?11. Are parking arrangements?12. Is there a playground?
Nico's manager for breaching ban on classes
Nichol Police on Saturday morning, despite the ban on Pyramid Classes near the Nicoll Rajahn Cinemas Four Road, the manager of Arvind Jain and Kashyad Prajapati Vas have registered a case against Sanjay Prajapati, manager of Gyan Jyoti Group tuition classes. While sitting in the Shahibaug Shree Mahaprabhuji Society, Jatin Patel runs tuition classes at home. Neighbors Subhash Chandra got into a quarrel saying closing the classes. Subhash Chandra filed a complaint against Jaitin Patel at Shahibaug Police Station.
Notice of more 663 tuition classes in city without Fire Safety
After the incident in Surat, a notice was issued to 663 tuition classes in Ahmedabad on Sunday in a proceeding against the fire safety tuition class. The campaign will continue in the coming days. 2119 class got notice in two days only. Following the fire incident in Surat, steps have been taken in respect to fire safety facility in tuition classes in Ahmedabad. After notice issued to the 1456 tuition class on Saturday, notice has been issued to 663 more tuition classes today.
Not only fire safety not 62 hotel
The municipality has issued notices to 62 hotels and restaurants other than fire facilities in the south-west zone of the city. They have been instructed to immediately install fire safety facilities. Muni The Health Department has notified notices of hotel-restaurant other than fire safety facilities in the city's south-west zone. After the collapse of Surat, Fire Safety facility is also mandatory in the restaurants and restaurants where there is usually a large number of citizen traffic.
Most tuition classes in the city are closed
Whenever a municipal court takes action against the tution class that has no fire safety facility. The team is usually closed when it reaches any tuition class. Because of that Muni. The system has chipped notice at the door of the tuition classes.read news report