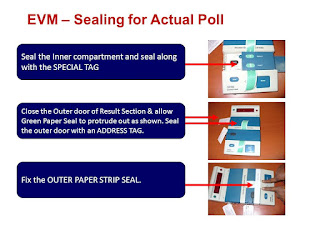 1. The Electronic Voting Machine (EVM) is a reliable system for conduct of elections in which oneperson has to be elected out of many candidates.2. EVM consists mainly of two units – (a) Control Unit (CU) and (b) Balloting Unit (BU) with cablefor connecting it with the Control Unit. A Balloting Unit caters upto 16 candidates. Four BallotingUnits linked together catering in all to 64 candidates can be used with one Control Unit.3. EVM uses a modern microcomputer and other Large Scale Integration (LSI) chips. It operates on special Power pack. It is tamper-proof, error-free and easy to operate. It is easily portable. Thepolling information once recorded is retained in its memory even when the Power pack is removed.4. The machine, which is according to the design approved by the Election Commission of India, ismanufactured by Bharat Electronics Limited (BEL) and Electronics Corporation of India Limited. Itis the end product of considerable experience and extensive trials in Indian Elections under theguidance of the Election Commission of India.5. This chapter aims at introducing the machine and familiarising the electoral officials with itsfunctioning.OPENING OF CARRYING CASES6. The Balloting Units and Control Units are supplied in separate carrying cases. A carrying case canbe opened by pressing the latches simultaneously, on both sides of the handle, as shown inFig. 1.7. Remove the Units from the carrying cases carefully by using both hands.BALLOTING UNIT9. The Balloting Unit is that unit of the machine which the voter operates to exercise his / herfranchise.10. It consists of a rectangular box. The box, which is as shown in Fig. 3, has -a. Interconnecting Cable,b. Ready Lamp,c. Slide Switch Window,d. Sixteen Candidates’ Buttons,e. Sixteen Candidates’ Lamps andf. Provision for insertion of Ballot Paper containing the SI. Nos, Names and Election Symbols ofcontesting candidates under a transparent (polycarbonate) sheet (Ballot Paper Screen).12. The ‘Ready Lamp’ is on the top left side of the Balloting Unit. This lamp glows GREEN when the‘Ballot Button’ on the Control Unit is pressed by the Presiding Officer to enable the voter to recordhis vote. It goes off when the voter has recorded his vote.13. The Slide Switch Window is on the top right side. The Slide Switch inside the Balloting Unit canbe operated to reveal through the window the figures 1, 2, 3 or 4. When only one Balloting Unitis to be used, the switch is operated to show the figure ‘1’ through the window. If a secondBalloting Unit is used, the switch in that Unit is operated to show the figure ‘2’ through thewindow of that Unit, and so on.14. The voter records his vote by pressing the Candidate’s button against the name and symbol of theC andidate of his choice. When the Button is pressed, the Lamp (Candidate’s Lamp) on the leftside of that Button glows RED and the voter’s choice is recorded.15. The Balloting Unit has a provision for inserting on its top face the Ballot Paper in which theSI. Nos., names and symbols of the contesting candidates are printed. A transparent polycarbonate sheet (Ballot Paper Screen) protects the Ballot paper.IMPORTANT LINKS::::- ➡click here ➡ click here  ➡ click here 3