10% ANAMAT 5 YEARS BENEFITS IN GOVERNMENT JOB
10 Percentage Savarn Anamat In Gujarat
The Narendra Modi government on Monday approved a 10 per cent reservation for economically backward upper castes in government jobs. Following the cabinet approval, the government will now move to amend the Constitution in order to grant this 10 per cent reservation.
Article 16(4) of the Constitution enables provision of reservation to Backward Class of citizens, who are not adequately represented in the State. Reservation is provided to Scheduled Castes (SCs), Scheduled Tribes (STs) and Other Backward Classes (OBCs) at the rate of 15 per cent, 7.5 per cent and 27 per cent, respectively, in case of direct recruitment on all-India basis by open competition. 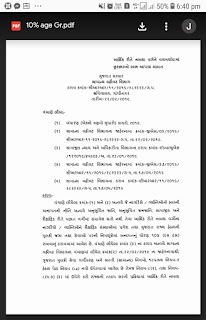 A bill to amend Article 15 and 16 of the Constitution will be moved by the government in Parliament on Tuesday and is likely to extend the Winter Session for the same by two days.
However, it is unlikely to get parliamentary approval immediately since any increase above 50 per cent -- a limit set by the Supreme Court -- will be subject to judicial scrutiny.
HIGHLIGHTS
The Supreme Court, in a 1992 ruling, had set the cap for reservations at 50 per cent