Central government to increase reservations from 50% to 60%. Additional 10% to be given to Economically Backward class

The central government has played a bigger role on reserves. For the economically backward sections of the Cabinet meeting, 10 percent reservation has been given. The reservation quota will be 49% to 59%.

According to media reports, those who have less than Rs. 8 lakhs of family income will get the benefit. However, no official confirmation has been made yet.

It is to be mentioned that for last few years, the decision of the Modi government on the SC / ST Act was displeasing to the people of the genus. As well as in the latest assembly elections, considering the defeats in three states, the families can be seen as their target.
Click Below Links To View Rastrapati Letter 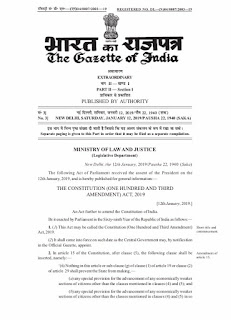